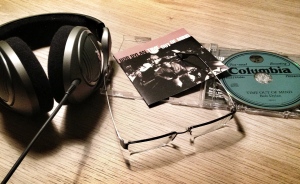 First Published January 2013: See disclaimer below:
From the first guitar strums of Love Sick – to the seconds when the voice appears – I get the chills of rereading my favorite album in the world – Time out of mind by Bob Dylan – also it is hard to think of a better title for this months re-read topic – because time should be out of mind when you think about the best of art – music, games, movies or poetry…

The well known story of this album is that Dylan was not satisfied with producer Daniel Lanois sound – I have to disagree on that one, Bob – I absolutely love the sound and the feeling it provides… it is dusty and like the wind turning a bit chill after a warm summer day… and it is a very unique sound too

Yet again I don’t want every album to sound like this. There are lots of songs and albums where this sound would not fit – but like in a really good book… The tone of the words fit the story perfect. Daniel Lanois produced Dylans 1989 album “Oh mercy” as well – and it is an amazing album too… But in my world Time out of mind has that extra something that makes it even more of an album instead of individual songs..

Can you re-read an album? I think you can. The lyrics are very important and Dylan has been mentioned for the Nobel prize in literature several times by some of the finest literary minds on our planet… – but you shouldn’t limit his candidacy to the words alone because what he does is tell stories set to music in a way that has been done by bards for  hundreds of years but doing it in a way that tells not only stories about modern life and being human – but the story of modern rhythmic music at the same time… Blues, country and lots of folk…

I was born here and I’ll die here against my will
I know it looks like I’m moving, but I’m standing still
Every nerve in my body is so vacant and numb
I can’t even remember what it was I came here to get away from
Don’t even hear a murmur of a prayer
It’s not dark yet, but it’s getting there

Read more:Bob Dylan – Not Dark Yet

The stories and lyrics focus on mortality, love and art in a way anyone can relate to and at the same time have different levels like a fairytale filled with muses who deliver divine inspiration and muses who don’t.

It is feelings set to music – and stories of being a person in the modern life with all it offers us humans of choices, experiences and relations…

Read more: Bob Dylan – Trying To Get To Heaven

Time out of mind is Dylan’s 30th studio album released in 1997. It won 3 grammys including album of the year in 1998. The year of its release Dario Fo got the nobel prize in literature for his plays – mainly for combining satire and improvisation in his plays… (Just saying!)

It’s mighty funny, the end of time has just begun
Oh, honey, after all these years you’re still the one
While I’m strolling through the lonely graveyard of my mind
I left my life with you somewhere back there along the line
I thought somehow that I would be spared this fate
But I don’t know how much longer I can wait

Disclaimer:
This post is written in one piece a Saturday evening with my headphones on and in the company of Time out of mind. It was an exciting new way to listen while writing – It confirmed me in my love for the album and my experience of it being a very important timeless piece of art – I will re-read again – for sure.

This post was first published January 22, 2013 . I wrote this about my favorite album for Read Watch Plays topic about re-reading and re-blogged it at this blog asking: Can you read an album? Iguess the answer is. Yes you can!